Definition: A compiler is a computer program that transforms (translates) source code of a programming language (the source language) into another computer language (the target language). In most cases compilers are used to transform source code into executable program, i.e. they translate code from high-level programming languages into low (or lower) level languages, mostly assembly or machine code.

Definition: An interpreter is a computer program that executes instructions written in a programming language. Translation occurs at the same time as the program is being executed.
It can either

Have you ever thought how the Python code is actually executed by the Python interpreter? What steps are carried out to generate the final output of your Python script? This article answers all these questions in a simplistic manner!

Interpreter is nothing but a software which can run your Python scripts.

Interestingly, it can be implemented in any programming language!

If you have been coding in Python for sometime, you must have heard about the interpreter at least a few times.
From a programmer’s perspective, an interpreter is simply a software which executes the source code line by line.

For most of the Python programmers, an interpreter is like a black box.

Now, let us scan through the python interpreter and try to understand how it works.

Have a look at the diagram shown below: 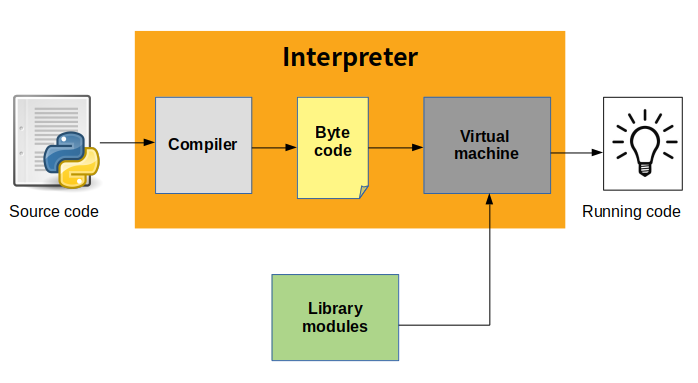 I hope you didn’t get amazed to see a compiler inside an interpreter!

From the figure above, it can be inferred that interpreter is made up of two parts:

What does compiler do?

Compiler compiles your source code (the statements in your file) into a format known as byte code. Compilation is simply a translation step!

Byte code is a:

Roughly, each of your source statements is translated into a group of byte code instructions.

The process of compilation in CPython interpreter’s compiler can be divided into 4 main parts:

This byte code translation is performed to speed up the execution—byte code can be run much quicker than the original source code statements.

What does Virtual Machine do?

As soon as source code gets converted to byte code, it is fed into PVM (Python Virtual Machine).
It’s just a big loop that iterates through your byte code instructions, one by one, to carry out their operations. The PVM is the runtime engine of Python; it’s always present as part of the Python system, and is the component that truly runs your scripts. Technically, it’s just the last step of what is called the Python interpreter.

Lastly, here are a interesting points:

when we update source code of imported module, how does interpreter picks up that updated code?